“Swaziland needs to accelerate the process of passing the Freedom of Information and Protection of Privacy Draft Bill of 2007 into law,” according to a new report by the Media Institute of Southern Africa. 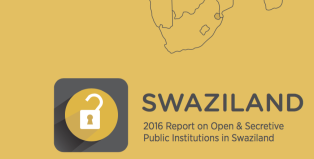 The report on open and secretive public institutions in Swaziland is an annual assessment, based on field research and website analyses, that considers how transparent government departments and agencies are.

This year’s report, in a similar vein to previous editions, offered some good signs but overall the picture is less than flattering.

“It is commendable and promising that all the institutions have provided some kind of response to the information requests,” said the report.

“It has to be pointed out however, that thorough follow up and perseverance was necessary, reminding all the institutions several times to provide the information requested. Government ministries and public institutions still prefer withholding public information rather than releasing it to the media and citizens.”

In recognition of its good practice, the Swaziland Communications Commission was awarded with the ‘golden key’ for being the most open institution from the eight institutions that were surveyed.

Coming in last place was the Central Statistics Office, which was awarded the ‘golden padlock’ for being the most secretive of the institutions that were looked at.

This site uses Akismet to reduce spam. Learn how your comment data is processed.