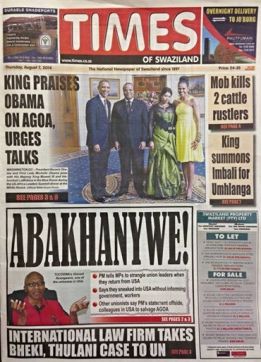 “Prime Minister Sibusiso Barnabas Dlamini has called for the strangulation of workers union leaders who went to Washington under the pretext of going to save AGOA,” reports the Times of Swaziland.

The competing daily Swazi Observer also reported on the matter however said the PM used the word ‘discipline’ and not ‘strangulation’.

Meanwhile, it has been reported that a top US law firm will take the case of two jailed Swazi writers to the UN.

“Ramodibedi, who has for some years concurrently held the position of chief justice of Swaziland and president of Lesotho’s highest court, was a few weeks away from facing an impeachment tribunal in Maseru (capital of Lesotho) on charges that included alleged insurance fraud and other charges of improper behaviour in Lesotho,” reported South African newspaper Mail & Guardian in April 2014. 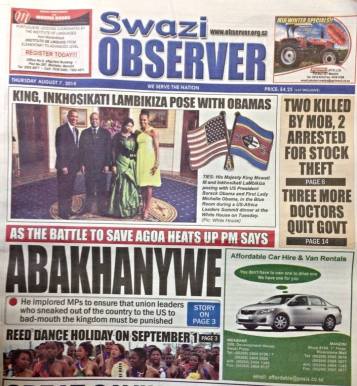 “A number of the charges also related to actions in Swaziland, where his period as chief justice has been dogged by controversy,” continued the Mail & Guardian article.

Swaziland’s high court, which is led by CJ Ramodibedi — who also heads the kingdom’s judicial services commission which recommends judges to the king who then appoints them — found that the duo had disrespected the CJ and brought the judicial system into disrepute.

Makhubu’s and Maseko’s opinion articles were deemed “scurrilous” and they were convicted of criminal contempt of court. The case brought attention to the lack of freedom of thought and expression in the southern African country.

If you would like to assist The Nation magazine as it faces mounting legal costs, as well as being fined $US10,000 for publishing the two articles, click here.

This site uses Akismet to reduce spam. Learn how your comment data is processed.